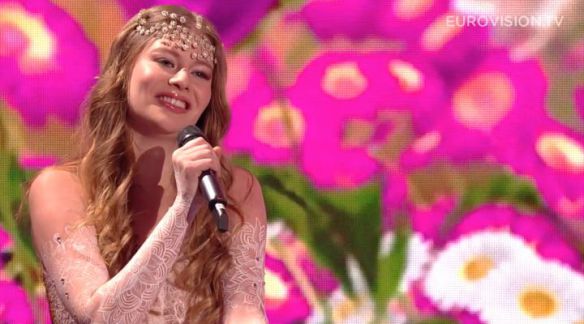 Beauty, stage experience and a beautiful song, in French language. These are the strong points on which Zoe relies, in representing Austria this year to Eurovision.
Zoe is both singer, songwriter and actress and her song, “Loin d’ici” is like a fresh spring air.
Star Gossip Magazine talked with Zoe in a new exclusive interview!

1. Hello, Zoe! First of all, tell us which is the best lesson that you learned thoughout your carreer?

The best lesson I have learned so far is „If you have a dream, never give up“ 🙂

2. Your song is one with a very special mood. Tell us a bit about its story, its message and its composers. Why in French?

In ‚„Loin d’ici“, I’m singing about a journey to an imaginary paradise, a place where everyone is happy singing and dancing. It’s a song that is meant to radiate positive vibes. We wanted to put a smile on the faces of everyone that listens to it :)) „Loin d’ici“ was written by me and my father, who is also my producer. We recorded a first version of the song for my album „debut“ that was released in October 2015. The fist version was just guitar and strings and was recorded in a few hours in the studio. We liked the recording a lot, since it’s genesis was so easy and effortless, but made us happy every time we listened to it 🙂
When I got the offer to participate in the austrian preselection again, we immediatly thought of this song, and adapted it to a concept that would fit better for the Eurovision, making the end more dynamic etc…
Why in french? Well, when I started to write my first songs together with my father, we just fooled around, having fun. I sang in french because I though it would sound nice, and then we both said: This fits. So my whole album turned out to be in french. I have to add that I grew up with french chansons (Piaf etc) and that I was in a french school (My whole family is francophile, my grand parents live in Paris). I just love the language and french culture.

3. What feelings does it give your representing of your national country to the biggest european music contest?

I am so grateful to get this chance. Since my participation in the preselection last year, my wish to get on the great stage of the ESC grew, and I really wanted it this year. I’m so happy that it worked out! I will do my best to make my country proud 🙂

4. Eurovision has become over years a political contest. Do you think that nowadays it is more important to have political and financiar power than vocal and musical strength?

I don’t think about these things. I just want to perform my music, do something beautiful, make people happy and give my best.

5. What are your future plans after the moment Stockholm 2016?

I will work on my second album, play tours (I love playing live with my band). I will go on working on my career as actress and hope to get more roles in cool productions 🙂

6. Did you listen the songs that have been launched by far for Eurovision 2016? Which do you like the best?

I have to admit, I didn’t have the chance yet to go through it. Can you send me some recommendations? 🙂

7. What advice would you give to someone who choose to start a musical carreer?

Never give up 🙂 and all you need is love 🙂 If you do it with love, you will succeed.

8. How far do you know about Romania by now?

Not so much. Unfortunately, I’ve never been in Romania so far, but I definitely want to go there to visit!

9. Share a message for our readers and your Romanian admirers!

I hope to see you all in Stockholm to celebrate a great party full of love & respect! Bisou ZOE