The song for Eurovision-2022 was written in 2021 and was dedicated to the mother of the band’s leader Oleh Psiuk, whose name is Stefania.

But very quickly the song expanded its meaning to all mothers who care for their children and protect them from the scourge of war. From the song about a mother, it has become the song about the motherland.

Only a few days after Kalush Orchestra was selected to represent Ukraine in the Eurovision Song Contest, Ukraine was invaded by Russia, and the song became a trending soundtrack to war events in social media.

Hundreds of videos were posted with ‘Stefania’ as a soundtrack on Tik-Tok and Instagram, while the band’s participation in the Contest was at a clear threat.

We still make music now, but of course not as actively as before. We already have some new songs that we hope you can all hear soon. We do write a lot of tracks; we have lot of interesting things in making. Usually, we get together with Kalush Orchestra as band and just start jamming. We do it at any convenient spot – at hotel, or even in Zoom. Every moment counts.

We founded a volunteer organization to help people find shelter, move, find medicine. Now we have 35 active members around Ukrainian cities. It is called “Ty de?” – “Where are you?” This is very important now for thousands of our citizens.

3 expectations that you have from you now after the semifinal

We want to show Ukrainians on Eurovision final night that they are not alone, that all Europe is watching us fighting in this brutal war and supporting us. That there is no other way, we will win.

We believe in our song, it is now that reflects the spirit of the time. For us, the victory would mean a high appreciation of Ukrainian music, its uniqueness and beauty.

Participating in the Eurovision is an opportunity to present our culture at the international level and show the strength of the Ukrainian spirit and bravery in the music arena as well.

It’s always nice to be asked about our Eurovision song and our music.

3 strengths on which you rely on the Turin stage

“Stefania” staging shows bravery and the strength of Ukrainian spirit  as well as unique and rich culture that is under attack now. The stage costumes reinforce this message and pay tribute to Ukrainian roots.

The screen content is focused on the limitless universe, with its vast coldness and emptiness, but it becomes alive in the light of Kalush Orchestra’s motherland – Ukraine.

The core elements used on stage are mother’s eyes, filled with tears because of the lost spring, and her hands that protect the yellow-and-blue universe. 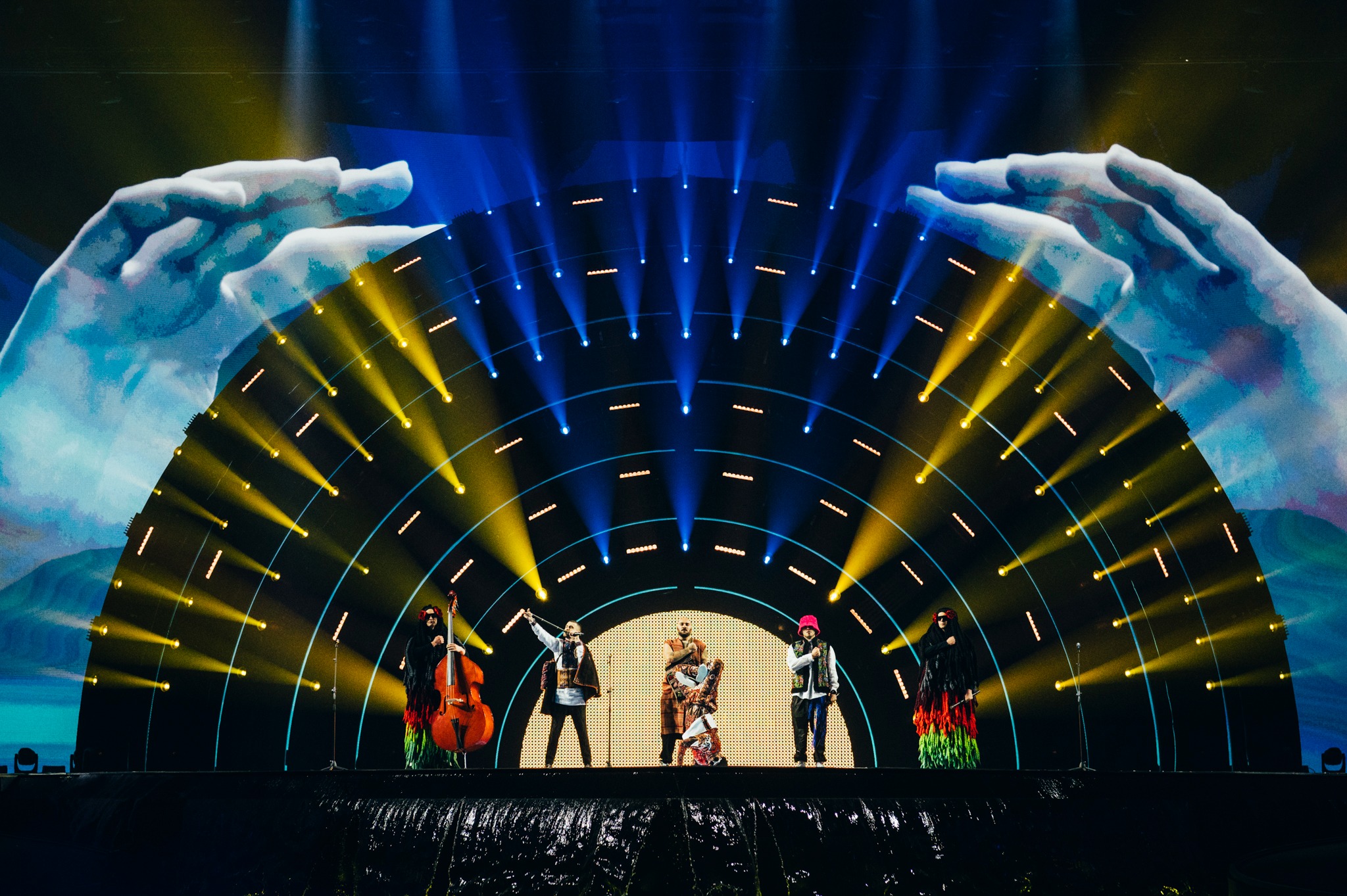 Of course, the preparations for Eurovision-2022 were challenging for us because of this war, but we are were doing our best to bring the best performance for you. For a long time there was no such opportunity to meet physically in Ukraine, so we rehearsed online. Then the whole group gathered in Lviv to spend our first rehearsal finally together offline. In Turin we try to rehearse as much as possible. The costumes for Eurovision have been completely changed. And we have a completely new stage design.

Kalush Orchestra is one of the young representatives of a vibrant Ukrainian-language hip-hop scene that has been trending in the past few years with dozens of top stars appearing in modern urban culture.

The key point of difference of Kalush Orchestra from other bands in Ukraine is the combination of ethnic music elements with modern sound production, hip-hop dances and Ukrainian-language rap. The essence is that we take the old Ukrainian folklore that has been forgotten. We dig it out from many generations and add modern, contemporary elements, rap, and instruments. In the end we have a combination of what our ancestors had and what the young people like today. And those are our songs.

All songs of Kalush and Kalush Orchestra are written from their own experiences. Sharing your creativity means being open to your listeners. Now we want a song to be heard on the world stage in Ukrainian, everyone should hear this music.

For us, each participant is a worthy competitor and a worthy representative of his country. We would not like to single out anyone.  We are getting along well with most of the guys.

Still we should say It was nice to meet Lauri Ylonen, the leader of The Rasmus, in person. Everyone has probably heard their songs, and now we are performing on the same stage. Also, it is very nice that the guys from The Rasmus really support Ukraine. We even managed to sing our “Stefania” together. We also sang our song together with a participant from Poland – Ochman.

Also WRS has a very entertaining performance which Eurovision audience will definitely like.

We would like to win Eurovision -2022 not only for ourself, but for all Ukrainians.

1.Do not stop there and move only forward. 2. Listen to the music of the Kalush Orchestra and follow our news on social networks. 3. Eurovision is a really important international competition that opens new music and musicians to the world.

At the moment we have a special authorization to leave Ukraine. After the contest, we will go back home and do what we used to do before.

We want to present our new songs that are ready and waiting for their time.

And we hope to celebrate another great victory of Ukraine.

In a new integral Ukraine, a rebuilt, prosperous, happy country